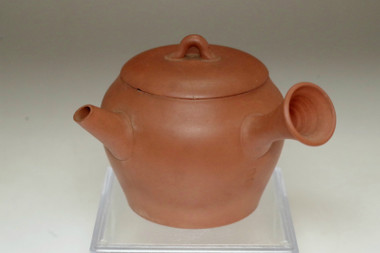 Regarding the shipping of products impacted by Coronavirus

Japan post stopped international postal service exclude a few areas.
We can ship to America, England, Germany, France, Denmark, Singapore, Taiwan and Hong Kong.
About other countries, we will operate a layaway service only for a while.

Up for sale is this "Antique vermilion stoneware tea pot by Yamada Jozan #3905" If you have any questions please contact us before buy it. No reserve.

I think that this was made by Jozan or Jozan II, however, I could not identify which was maker.

Founder Yoshiwara Kasyu (1850-1919)
Formerly Owari Han. His real name was Yoshiwara Nakata.
Pen names include Kasyu, Hoga, and Fujiyu.
Since his daughter became the wife of Yamada Jozan I, he provided Jozan's pottery works with his Chinese character engravings and landscape paintings. Almost all of Kasyu's works are made by hand and he is known for works such as teapots and incense containers shaped like vegetables.

Yamada Jozan (1868-1942)
His real name was Hamajiro.
He studied the craft of pottery at Ina Sosuke's ceramic factory.
After that, he refined his technique at Koie Hojyu's Mt. Kanashima (ceramic factory) and became independent after several years.
Since then, he devoted himself to making teapots with a potter's wheel.
He took pride in his graceful Chinese-style teapots and he is known for leaving behind numerous masterpieces that are fitting for a master craftsman.

Yamada Jozan II (1897-1961)
His real name was Makoto.
He learned the potter's wheel from Jozan I and seal engraving from Yoshiwara Kasyu, his maternal grandfather.
He learned drawing from Yoshida Kinji (pen name - Ichiha), the principal of the Tokoname pottery school, and took the pen name Futaha.
He changed his name to Kojozan in the middle of the Taisho period, then he took on the name of Jozan II after the death of Jozan I, and he fully demonstrated his traditional techniques.
Jozan II's teapots also have engravings by celebrated calligraphy and artists.

Yamada Jozan III (1924-2005)
Born the eldest son of the second generation Yamada Jozan, he studied under his father and grandfather, who was the first generation Jozan, while attending school, in order to inherit the family business.
In 1947, after the death of the first generation, his father succeeded the name as Jozan, and Minoru took on the name his father used to have, Kojozan.
In 1958, he was chosen for a prize for the first time in the Fifth Japan Traditional Kogei Exhibition, and he received the Grand Prix at the Brussels International Exposition in the same year. After receiving awards such as the First Class Asahi Prize in the Seventh Daily Life Kogei Exhibition in 1959, he was inaugurated as a full member of the Japan Kogei Association in 1962.
In addition, he succeeded the name as the third generation Yamada Jozan from 1961, following the death of his father.
The 1970s became an opportunity for him to be rated highly on an international scale, such as displaying his work in the Osaka International Exposition in 1970 and in the Third Biennale International Ceramics Exhibition in 1973 (received the Honorary Top Grand Prize.)
He also started the Tokoname "Handcrafting Teapots Society" with other local pottery artists to hand over traditional Tokoname ware, assuming office as the society's president.
Not content with tradition, he continued his research day by day, such as completing his original technique of firing a teapot with its lid still on with an old Tokoname anagama kiln, and then pouring natural glaze on top as it is. In 1994, he was acknowledged as an Aichi Prefectural Designated Preserver of Intangible Cultural Property, and he went on to be acknowledged as a Nationally Designated Important Intangible Cultural Property (Living National Treasure) in 1998.
He excelled in the technique of producing teapots (mainly the type used for sencha tea) to the point that it is said that Tokoname shudei pottery is equatable to Yamada Jozan. He produced a wide range of works, from classical pieces to innovative works aligned with modern purposes, and it is said that there are over 100 designs that served as prototypes.
In addition, apart from teapot works, he has also left remarkable pieces such as sake cups, pots and large bowls.

Cancellation and Return Policy
We accept returned items only if you contact us within 30 days after you receive the items. Return-shipping costs are the buyer’s responsibility. When the items arrive at our office, we will refund you ASAP after checking the item's condition. 20% restocking fee may apply.
Even if you ask a cancellation before shipping the package, we may ask a 20% restocking fee.

To customers buying tableware
Our products are mostly secondhand goods. We sell them in the same condition in which they were purchased, so please be sure to wash them thoroughly before actually using them.

Order through email
If you feel troubled to buy items with a cart system, I would appreciate it if you could tell me what items you want. Please let me know the name of the items through the “contact us” page. A PayPal invoice will be sent to your email address later.