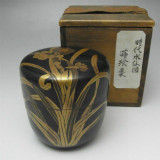 Natsume is a traditional tea caddy made from high-grade wood and decorated with a gold lacquer called Makie. Its name comes from its shape, which is like a jujube (natsume in Japanese). Before the famous artist Sen no Rikyu (1522-1591) used natsume tea caddies in his tea ceremonies, pottery tea caddies were the norm. Natsume was used for daily necessities as pill case or something for townsman. Natsume remains popular with Tea Ceremony masters to the present day.
Originally, usucha (weak green tea) was called "packed tea" because it was a low-quality tea that was used to fill in the space around bagged koicha (strong green tea) when it was placed in a tea earn. For that reason, from the time of Takeno Joo to the time of Sen no Rikyu, "tea" only referred to koicha. Because usucha was looked down upon, its container was a wooden box called a hikiya, the purpose of which was to store the chaire, koicha tea caddy. In other words, the case originally used for the chaire, koicha tea caddy, was put to another use, eventually being used independently as a usucha tea caddy. Technically, the hikiya for tea containers like nasu (an eggplant-shaped tea caddy) and bunrin (an apple-shaped tea caddy) is called a natsume and the hikiya for katatsuki (a container with protruding parts at the top) is called a nakatsugi, but generally, it is common to refer to both kinds of hikiya as natsume. They are broadly classified as large natsume, medium natsume, and small natsume, and each of these categories is further divided into large, medium, and small. 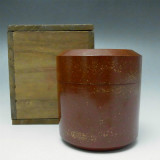 The standard for a large natsume: 8 cm

The standard for a medium natsume: 6.6 cm Students of tea ceremony school basically use this size natsume when learn “Fukusa-sabaki” in first practice session.

The standard for a small natsume: 5.0 cm Also, though small natsume are also used for koicha, they must have no design. 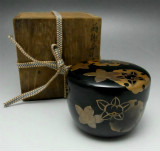 Chaire, the tea container, is used for thick green tea and it is the most expensive of all the tea ceremony tools. Formerly, during the period of war, a daimyo would give it as a reward to samurai that held up the deed of arms. At that time in Japan, the tea ceremony was in popular fashion among samurai and practising it was a status symbol. It's a famous story, but during the Warring States period it was said that if you obtained all “The big three chaire (Narashina, Nitta, Hatsuhana) " it would be the same as if you had obtained the whole of Japan. Narashiba was the only one that Oda Nobunaga could not obtain. According to legend, Once Hatsuhana was perfumed oil caddy of Yang Kuei Fei. 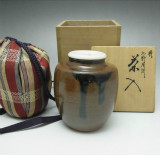 Angled as if to appear like shrugging shoulders, it expands out ever so slightly from torso to waist, finishing with a taper at the base. Just like it appears, it is called katatsuki due to its raised shoulders.
It is said that nasu (aubergine) tea containers are the masses, whereas katatsuki are the great generals, having been especially loved by samurai. They reportedly favoured them due to their resemblance to a warrior's posture while sitting in seiza. 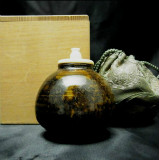 The name Nasu dervies from the shape of the container resembling the fruit of the aubergine plant. Generally round with a bit of plumpness at the bottom, it has a narrow aperture.
It is thought that they were used in China as oil pots, although when they reached Japan they were used for tea, formerly considered the highest grade Chinese tea container. There is a famous example known as the tsukumo Nasu tea container. 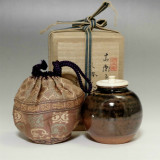 The name Bunrin originally comes from the shape resembling that of an apple, Bunrin being an elegant synonym for apple; during the reign of Emperor Gaozong of the Tang Dynasty in China, when a man named Li Jin offered a beautiful apple to the emperor, the overjoyed emperor made Li Jin a government official with the name Bunjinro - or so the story goes.
Bunrin is the exemplary tea container style of Chinese origin, a small pot with a beautiful shape from shoulders to torso and a low base that since time immortal has been considered the finest of Chinese tea containers along side Nasu; there are specialty versions as well, some of the more famous being Jukou, Honnoji, Hamuro, and Chikushi. 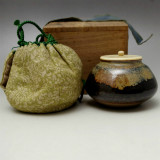 Taikai is a particular style of tea container design. The name "Taikai (vast ocean)" comes from the fact that the mouth of the tea container is very broad.
Taikai are fairly large, flattened circle-shaped tea containers, with wide mouths, short necks, and horizontal shoulders. Many have a continuous engraved line running around the mid-section.
To begin with, they weren't used at the tea ceremony, but as a Hikitame (Matcha powder container) at the Mizuya (kitchenette of tea ceremony room), for matcha green tea that had been ground with a pestle. However, in the wabi-cha fashion established by Murata Juko, it came to be used at the tea ceremony.
Originally, this shape of tea container was called "Daikai (inland sea)", but from the time of Kobori Enshu, larger ones were re-named "Taikai", and smaller examples, "Daikai".
Usually Daikai Chaire is using for Koicha (thick tea) only but Taikai Chaire is using for Koicha and Usucha (thin tea) at the present time.