The life of Kato Tokuro

Kato Tokuro lived a turbulent life as a ceramic artist beyond the bounds of ordinary people.

He called himself a “poor farmer and poor kiln owner in Seto”. Tokuro's real name is Shokuro. He was born in 1898 into a Kano family that made a living from farming as well as pottery. From his early childhood, he enjoyed playing with clay and often collected pottery shards from the neighborhood.

His grandmother, who hoped to revive the family business, believed that schooling would ruin people, and so he was forced to learn the art of making pottery.

At the age of thirteen, inspired by the black-Oribe tea bowl of the Momoyama period, he began working with Mino pottery (Oribe pottery is a type of Mino pottery).

He took over his father's pottery kiln and became an independent potter under the artist name of "Tokuro" when he was 16 years old. Interestingly, the only reason for the name change was that there were so many other potters in the area named Shokuro.

At the same time, under the influence of a friend who was the same age as him, he began to study tea ceremony. He found a copy of "The Complete Book of Tea Ceremony Genealogy" at a bookstore in Nagoya. The book was written in a delightful Chinese style, and it was this book that taught him the close connection between the tea ceremony and pottery throughout history, and that the tea ceremony was the most important part of traditional culture. It was a great experience for him and he was truly amazed at how one book could change a person so much.

In 1918, at the age of 21, he married his childhood friend, Kato Kinu, who was five years younger than him. He also began to study ceramics in earnest while excavating old kiln sites.

After having many opportunities to see the masterpieces of the Momoyama period, Tokuro became absorbed in the study of Shino pottery. In 1929, he built a new anagama (hole-type kiln) in Sobokai town of Seto city to make Shino pottery in imitation of the old pottery.

In the same year, he discovered a piece of kizeto pottery inscribed with the inscription "Bunroku 2 (1953)" in the lower part of an old Mino kiln.

In those days, Tokuro often visited a small teahouse in Sobokai. When Mr. Yokoi from Tokyo, who was a famous tea master, came to attend a tea ceremony, he used the tea bowls that Tokuro had fired in January.

Yokoi was very impressed and said, "Let's take this one to Masuda Donno”. Donno was CEO of Mitsui financial clique and a very influential tea ceremony master.

Yokoi was an executive of Mitsui and Company at the time and was said to be the most influential subordinate of Donno. Yokoi took the five pieces Tokuro had brought to the tea party and delivered one of them to Donno.

Donno wrote, "this blue from indigo is bluer than indigo and looks cold like water from icicles that is colder than the icicles” and signed the wooden box of the bowl.

Thanks to Donno, Tokuro came to be noticed by the tea masters. The following year, his work "Fish Vase" was selected for the first time at the 12th Teiten exhibition.

This book was the starting point of a new view on Mino pottery in the Momoyama period, and he argued that Seto-ware was fired in Mino earlier than Seto.

However, this book caused an outcry among Seto citizens and resulted in a book burning riot.

He denied that Toushiro, who is enshrined as the founder of Seto pottery, was not the founder and argued that Kizeto pottery, Shino pottery and Oribe pottery were not unique to Seto, but the original pottery was fired in Mino, based on the findings of excavation.

The potters and others with conflicts of interest led an anti-Tokuro movement.

As a result, the house of Tokuro in Sobokai received threatening letters every day, stones were thrown at him, and a fire was started. Finally, he decided to evacuate his family to another location for safety reasons. But before evacuating, he was assaulted by a thug, severely injured by a beer bottle, and was forced to leave Seto.

In 1935, with the full support of Kawakita Handeishi, Tokuro opened his studio in Suishoen, a suburb of Nagoya (now Kasugai City). Almost all of Tokuro's surviving works were created in Suishoen. And one of Tokuro's masterpieces, Shino tea bowl "Akane" was also made there.

He always used to say, "Soil for one, soil for two, and soil for three. (He valued soil above all else)”. Also, Tokuro said "The Momoyama potter had the heart of samurai" so his art is powerful. 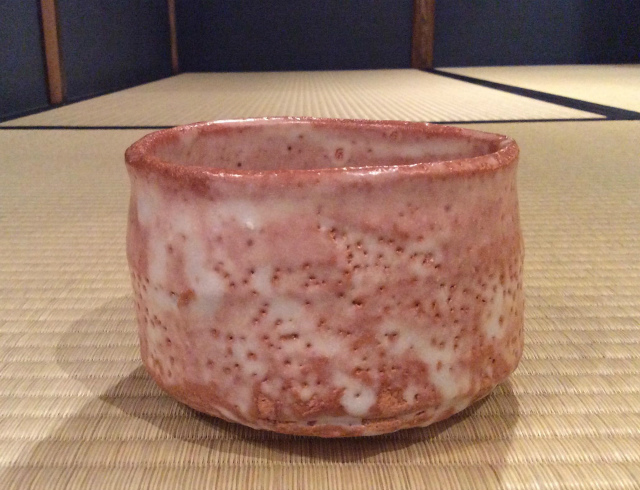 In 1951, he exhibited six pieces of tea ceremony pottery in Oribe pottery at the exhibition of Japanese ceramics at the Musée Chernusky in Paris. It became a hot topic when he exchanged his works with Picasso on this occasion. In 1952, he was selected as the first holder of Living National Treasure for the Oribe pottery technique.

In 1960, the incident of ”Fake Pottery Pot in Einin Period” broke out. The following is a brief explanation of the incident. A pottery pot was excavated accidentally during a road construction site in Higashi-Kasugai-area of Aichi Prefecture in 1943. The pot was inscribed with the inscription "Einin 2", indicating that it was made in 1294. Furthermore, the same type of pot was excavated from Seto. The pot excavated from the construction site has gone missing, but the pot excavated from Seto was designated as national important cultural property in 1959.

Amidst the uproar about this new important cultural property, Kato's eldest son, Mineo, claimed that he had made the pot himself, which caused a great commotion. However, Tokuro also claimed that he had made the pot, and from then on, he refused to say anything about it. Kato Mineo later changed his family name to Okabe Mineo after a conflict with his father, Tokuro, to distance himself from his father.

Because of this incident, Tokuro was stripped of his title of Living National Treasure. After that, he called himself "Muichimonin (all of nothing)" and devoted himself to his own pottery, working in Shino, Karatsu, Oribe, and Kizeto. He left masterpieces one after another and immersed himself in his life's work of compiling his original encyclopedia of ceramics.

Kato Tokuro, a leading figure in contemporary ceramics and a subject of much discussion, died at 10:05 a.m. on December 24. He died of a heart attack at his home in Nagoya City. He was 87 years old.

Kato Shuntai (1802-1877) and Hirasawa Kuro (1772-1840)At the beginning of the 19th century, one of the most influential figures in Owari pottery was born: 10th Kato Nihei, known as Shuntai.It is said that Shuntai served the clan when he was only 15 years old. This coincided with the timing of the revival of Ofuke-ware when [...]