A katatsuki-style tea container imported from China. One of the three most famous katatsuki-style containers. Said to have been one of Yang Guifei's oil jars. Named "hatsuhana (the first flower of the season, or a girl who has just flowered into womanhood)" for its elegance by Ashikaga Yoshimasa. Oda Nobunaga acquired it from the merchants at Daimonjiya for its fame, but lost it in the Honnoji Incident, after which it came to be owned by Toyotomi Hideyoshi. It was inherited by Ukita Hideie after his death, but following Hideie's defeat at the Battle of Sekigahara, it passed into Tokugawa Ieyasu's hands. 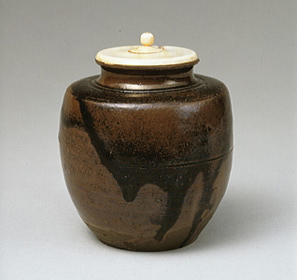