The beginning of Ofuke ware

I'd like to explain in a little more detail about the Ofuke-ware that appeared in the story of Kato Shuntai.

Ofuke-ware is a type of pottery that was made in the Shimo-Ofuke Garden on the north side of Nagoya Castle from the late 17th century to the 18th century. Also, pottery with an ash glaze containing iron called "Ofuke-glaze" is generally called Ofuke-ware.

Nagoya Castle was built at the northwest end of a plateau in the center of the city of Nagoya. The stone walls and moat of Nagoya Castle are made out of the edge of the plateau. This is a swampy area where rainwater seeps into the plateau and flows out. In ancient times, such a place was called "Fuke (meaning deep)". There are several parts of Nagoya Castle that are described as “Fuke”; the "Ofuke moat" on the northside, the "Ofuke Maru" of the castle walls that protrude from the moat, and the "Shimo Ofuke Garden" on the north side across the moat.

Because of the low-humidity area called "Fuke", water accumulated in the area where the earth was dug when Nagoya Castle was built, and a pond called "Goren Pond" was formed on the north side of the castle. In the pond, several small islands were created to take advantage of the original natural landscape and create a walking garden with a tea house and other facilities, which became the "Shimo-Ofuke garden".

Even though it was outside of Nagoya Castle, the Shimo-Ofuke garden was used for entertaining the shogun, so it is not a place where anyone can easily enter.

The fact that the third shogun, Iemitsu, visited Owari on his way to visit the capital and was entertained in this garden indicates that the Shimo-Ofukai garden was completed during the reign of the first Owari lord, Yoshinao (1624-1644, Kanei era).

In addition, pottery covered with Ofuke glaze has also been excavated in Mino. This pottery was excavated with shards of Oribe-ware, which was in decline at the time, and a document inscribed with the year "Kan'ei" has been found, so it is thought that the pottery was fired in the Kan'ei period (1624–1644, at the latest).

Returning to the story of the Shimomikawai Goniwa, during the Enpo period (1673-1681), the second lord of the Owari clan, Koyu, restricted "Sobokai clay", the raw material for Seto pottery, to the clan's official use only. There is a record that this soil was brought to Nagoya Castle.

■inside of Nagoya castle on google street view https://goo.gl/maps/L6w1NEdnbbp 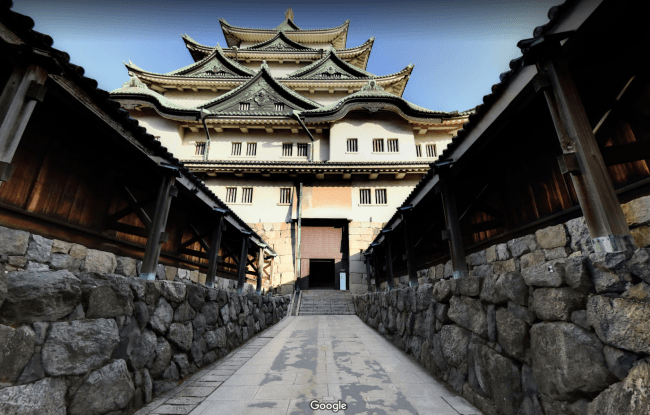