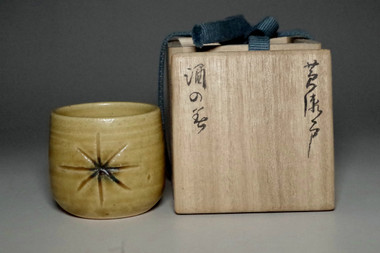 Up for sale is this "Rosanjjin 'kizeto guinomi' Seikoyo-kiln pottery cup #3080" If you have any questions please contact us before buy it. No reserve.

Kitaoji Rosanjin (1883-1959)
Born in Kitaoji-cho, Kamigamo in Kyoto in 1883 (Meiji 16). Rosanjin's birth was a result of his mother having an affair and his father, disgusted by this, committed seppuku suicide 4 months before Rosanjin was born. He had a poverty-stricken childhood and was put into foster care as soon as he was born, being passed on to various loveless adoptive households where he suffered abuse until he settled into the Fukuda household at age 6. One day, while running an errand for the place where he worked, he saw the sign for a restaurant in town called 'Kamemasa' on a paper lantern. The sign bore a picture of a tortoise and some letters drawn in a single brush stroke without the brush leaving the paper, and it captivated him, heightening his curiosity towards art. The man who drew this sign was Takeuchi Seiho, the eldest son of Kamemasa's owner who would go onto become the leading figure of Kyoto's circle of artists that dominated the Teiten and Bunten exhibitions.
In 1905 (Meiji 38), he became a private apprentice to calligraphy artist Okamoto Katei (grandfather of Western style painter, Okamoto Taro) and lived with him for three years. There, he was given the name Fukuda Kaitsu, and over time he gradually began to receive more orders for his work than Katei. In 1907, he became independent from Katei as Fukuda Ōtei. His work prospered and he spent his earnings on calligraphy tools, antiques and dining away from home.
On December, 1910, he traveled to Korea and lived there for three years, working as a clerk in the Printing Bureau of Korea's Administrative Agency. After staying in Seoul for just under a year, he headed towards Shanghai, where he met Wu Changshuo, who was well-known for being the best in the generation in calligraphy, art and seal engraving.
He returned to Japan in the summer of 1912. Half a year later, he was invited as a dining guest by the wealthy Koji Toyokichi of Nagahama and was proposed a place where he can devote himself to calligraphy and seal engraving. Now under the name Fukuda Taikan, he left in Nagahama various masterpieces such as ceiling paintings in small pavilions, paintings on fusuma sliding doors and name engravings.
Then, his wish to become the dining guest for the Shibata household which was frequently visited by Takeuchi Seiho, who he admired and respected, was granted and he requested to make a name engraving for Seiho. Seiho took a liking to his engraving and introduced him to people under his tutelage such as Tsuchida Bakusen, making him increasingly well-known as he became acquainted with the masters of Japan's circle of artists.
In 1917 (Taisho 6), he became acquainted with Benrido's Nakamura Takeshiro and the two became good friends, afterwards running the antique store Taigado together. Taigado then began to serve regular visitors food made from high-quality ingredients served in the antique pottery in the store, and a diner made especially for those with a membership called 'Bishoku Kurabu' was started in 1921 (Taisho 10). Rosanjin himself stood in the kitchen and cooked, and also made the works of pottery used in serving the food. On March 20th, 1925 (Taisho 14), Rosanjin, along with Nakamura, borrowed 'Hoshigaosaryo' in Nagatacho, Tokyo and started a high-quality restaurant open only to those with a membership, with Nakamura as the owner and Rosajin as an advisor.
In 1927 (Showa 2), he invited people ranging from potter Miyanaga Tozan and Arakawa Toyozo to Yamasaki, Kamakura and established a place to research ceramics, Seikoyo, and began working on pottery in earnest.
After the war, he was economically impoverished and lived a life of adversity, but in 1946 (Showa 21), he opened a direct sales store for his own work in Ginza called 'Kadokadobibo' and gained positive feedback, even from Western people staying in Japan as well. In 1954 (Showa 29), under the invitation from the Rockefeller Foundation, he held exhibitions and lectures in various areas in the West, and also visited Pablo Picasso and Marc Chagall. In 1955 (Showa 30), his Oribe ware designated him as a Preserver of Important Intangible Cultural Properties (Living National Treasure), but he refused this title.
He passed away at Yokohama City University Hospital due to liver cirrhosis in 1959 (Showa 34).

Recently, we’ve been having trouble with UK postal services. There have been frequent occurrences of packages being returned without notice.
I contacted the post office and they explained that even though they give notices to customers, the customers don’t come to pick up their package. However, it seems they don’t contact customers or leave a calling card practically since many of them have complained about never receiving a package or even a notice from the post office to me.
Additionally, in the past, the post office would keep packages for 2 weeks before sending them back but now, they only keep them for 1 week.
In order to solve this issue, UK residents will be sent an email notifying them that their package has arrived at the post office. If the package hasn’t arrived on time, UK residents should contact their local post office for more information.

Our products are mostly secondhand goods. We sell them in the same condition in which they were purchased, so please be sure to wash them thoroughly before actually using them.

If you feel troubled to buy items with a cart system, I would appreciate it if you could tell me what items you want. Please let me know the name of the items through the “contact us” page. A PayPal invoice will be sent to your email address later.

Return Policy
We accept returned items only if you contact us within 30 days after you receive the items. Return-shipping costs are the buyer’s responsibility. When the items arrive at our office, we will refund you ASAP after checking the item's condition. 20% restocking fee may apply.